This is what Covid lockdown looks like in a communist nation that some American leftists aspire to emulate. What’s really going on there is anyone’s guess.

An army of security forces in hazmat suits, known to residents as “Big Whites”, patrol the streets of Shanghai and hunt down anyone who breaks quarantine and leaves their homes. Those caught are arrested and most often beaten.

Shanghai has been under a total lockdown since April 5. Covid-19 cases continue to skyrocket in China’s largest city and financial hub as the city’s 26 million inhabitants have been barred from leaving their homes or apartment buildings.

Videos shared on Chinese social networks have shown people in desperation, complaining of lack of food and medical care.

Communist China is one of the only countries sticking to a “zero-COVID” policy, taking drastic measures such as lockdowns, closing international travel and enforcing mass testing to identify and isolate every case.

Shanghai residents for weeks were unable to set foot outside to forage for food for fear of arrest and incarceration.

Those who test positive for Covid, as 17,077 Shanghai residents did on Wednesday, are detained and transported to quarantine camps, whether they are symptomatic or not. Nine out of 10 show no signs of illness yet are still hauled off to the camps.

Many leftists in the United States have praised China’s response to the coronavirus. Here’s a look at what they’re praising:

• People are jumping off the balconies of high-rise apartment buildings. One video circulating in China shows a couple falling to their deaths. The husband was said to be distraught because the lockdown had cost him his business.

• Those who become so desperate for food that they break the lockdown policy and leave their apartments or homes are hunted down by “Big Whites” who patrol the streets day and night.

• Not even small children are exempted from “zero Covid.” Hundreds of infants and toddlers have been separated from their parents after testing positive. As one grieving mother complained on social media: “I’m so upset … This is inhumane.”

During a news conference Saturday, Shanghai Vice Mayor Zong Ming said sections of the city will now be classified as “precautionary,” “controlled” or “locked down,” depending on the results of Covid testing.

Residents in areas deemed “precautionary” with no infections over the past 14 days will be able to move around their districts, but gatherings will be restricted. In “controlled” areas, residents can move around in their neighborhoods, which are smaller than districts. “Locked down” areas will require everyone to stay at home.

Following a massive number of complaints, Shanghai on Wednesday lifted the isolation policy in which children were separated from their parents if they tested positive.

In an April 9 op-ed for the New York Post, Stephen Mosher noted: “Virtually every person on the planet now recognizes that they are simply going to have to live with the coronavirus from now on, in the same way that we have learned to live with the seasonal flu. Even countries that clung to China’s mass containment model well into 2021, such as Australia, New Zealand and Germany, are now abandoning it.

“Yet the Chinese Communist Party continues to pursue the impossible dream of COVID Zero.” 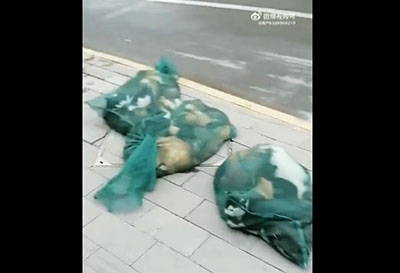 Cats and dogs belonging to Covid-19 patients and close contacts have been removed from homes and exterminated by the communist government.

The cats still alive in the bags were later terminated, reports say.

The risk of animals spreading Covid to people is considered to be low, but pets can contract the virus after close contact with humans.

But what about the cats?pic.twitter.com/DlX6YmNJGl

‘Big Whites’ patrolling Shanghai: What is ‘zero-COVID’ all about? added by Cosmic1 on April 14, 2022
View all posts by Cosmic1 →