Duck Dynasty’s Si Robertson on life, marriage and his unwavering belief in God

I don’t know what people do when they don’t have God in their life. When there’s death, or when someone has an illness that is a death sentence. What do they do in that time? I have no idea.”   According to Si, marriage is a union between two imperfect people who are destined to […]

Jesus’ prayer for cosmic oneness before leaving an alien world

John 17   And now I am no longer in the world, but they are in the world, and I am coming to you. Holy Father, protect them in your name that you have given me, so that they may be one, as we are one.  …   I have given them your word, and […]

In an exclusive interview, the Rev. Billy Graham tells Newsmax that President Obama’s “hope and change” mantra is nothing more than a cliché and warns that the nation faces increasing threats to civil and religious liberties from its government. Graham, who is preparing for possibly his last crusade, this time via video, said America is […]

I think a lot of the things that I get to see benefits from today in my lifetime is really a direct result of my grandfather. And it’s really related to the name that God has given my grandfather, and that’s a good name. Billy Graham, my grandfather, has represented Christ well. He’s not a […]

Easter Sunday, 2013: God sent his only begotten son so that Catholic students can hook up without judgment or joy

The Washington Post, in its Easter Sunday edition, raises a question at odds with its editorial policy: ”Time to stop hooking up? Why students are tired of casual sex’. This is the same “Washington Compost” that crusades daily in its Style section for all forms of casual sex outside the boundaries of the Judeo Christian […]

ST. LOUIS – An estimated 16,000 Christian youth attended opening night of Urbana 2012, a triennial student missions conference, at Edwards Jones Dome in St. Louis Thursday. InterVarsity Christian Fellowship organizers, who are hosting the event, hope that students will come to a decision about serving God locally or globally. “Surrender your plans and allow […]

Annie Lobert worked for 16 years in the sex industry, battled cancer and got into drugs. Dressed in black and seated on a white couch, the 44-year-old founder of Hookers For Jesus appears in the nearly 14-minute video on the website that features the testimonies of personal struggle and transformation of celebrities and everyday people. […]

CAMBRIDGE, Mass. — A historian of early Christianity at Harvard Divinity School has identified a scrap of papyrus that she says was written in Coptic in the fourth century and contains a phrase never seen in any piece of Scripture: “Jesus said to them, ‘My wife …’ ” The faded papyrus fragment is smaller than […] 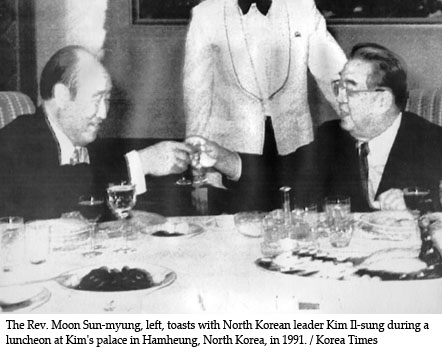 Special to CosmicTribune.com, September 12, 2012 by Michael Breen This article was originally published by the Korea Times in Seoul following the death at 92 on Sept. 3, of Rev. Sun Myung Moon, founder of The Washington Times. It’s hard to feel sorry for a billionaire, harder if he’s regarded by thousands around the world […]

Sun Myung Moon, savior to some, lived out large vision

Rev. Sun Myung Moon has died Sunday at age 92. The controversial founder of the Unification Church was known for attracting young converts in the 1970s and for conducting mass weddings. Sun Myung Moon was born in 1920 to a poor family in what is now North Korea. His life took a dramatic turn on […]