Solar spectrum shifted from absorption to emission during eclipse

[CLICK ON IMAGE FOR HIGH RESOLUTION / Constantine Emmanouilidi] In a flash, the visible spectrum of the Sun changed from absorption to emission on November 3rd, during the brief total phase of a solar eclipse. [Normally a spectrum of the sun will show dark lines where where wavelengths of energy for elements have been absorbed […]

UFOs no mystery to Bowie: Simply a ‘quantum topological doorway into dimensions beyond our own’

Singer David Bowie is well known for the allusions to his extra-planetary experiences throughout his career. After the release of his newest album, The Next Day, which was recorded largely in secret over the last two years, the singer’s fans have been reminded somewhat of the esoteric facets of this famous and, at times, odd […]

GENEVA — It helps solve one of the most fundamental riddles of the universe: how the Big Bang created something out of nothing 13.7 billion years ago. … [S]cientists said Thursday that after a half-century quest, they are confident they have found a Higgs boson, the elusive subatomic speck sometimes called the “God particle.” The […]

[FOR HIGH RESOLUTION, CLICK ON IMAGE] The galaxy at the image center, Hercules A, appears to be a relatively normal elliptical galaxy in visible light. When imaged in radio waves, however, tremendous plasma jets over one million light years long appear. Detailed analyses indicate that the central galaxy, also known as 3C 348, is actually […] 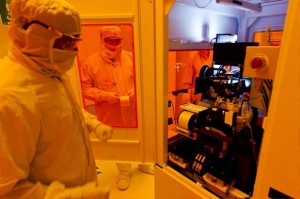 What if duplicate UFO sightings are quantum phenomena?

We’ve previously posed here the idea that UFOs may be macro-quantum artifacts …. And there is a way to test that hypothesis. If UFOs are macro-particles of quantum, they’d be subject to quantum entanglement; that is, a UFO seen in one place would mimic a UFO in another place, in the same time frame. The […]

By the time Uri arrived at the apartment the next afternoon, all of my equipment was operative and in place.  Two of my Israeli friends were present, Jacov and Ms. Shifra Mor.  I began by asking Uri to show me those talents of his that he felt the most sure of and to do them […]

By Dan Nosowitz Masayoshi Son, entrepreneurial founder of Softbank, Japan’s third-largest mobile network, and according to Forbes, the nation’s richest man, unveiled a vague but undeniably ambitious plan to completely change Japan’s energy infrastructure. His plan, which relies heavily on wind and geothermal power and abandons nuclear, would, he says, shift the majority of Japan’s energy […]

Russian efforts to make electricity available to isolated areas with a planned class of floating nuclear reactors could represent the most potentially disastrous idea to sweep the atomic power industry in years, due in part to the threat such plants would face from extremists and entities interested in tapping their technology for military use, Reuters […]