J.W. Marriott, who heads the Marriott hotel chain, praised Republican presidential candidate Mitt Romney for bringing “positive attention” to the Church of Jesus Christ of Latter-day Saints. Marriott is a personal friend of Romney and, like Romney, a Mormon. “Today we see the church coming out of obscurity, and we see that 90 percent of […]

[Click on image for high resolution ] Rising at sunset, the gorgeous Full Moon of August 31 became the second Full Moon in a month. According to modern reckoning, that makes it a Blue Moon. In fact, parts of the Full Moon do look a little blue in this sharp lunar portrait. Taken just hours […]

No Protestant on GOP ticket for first time ever

For the first time in the nation’s political history, the Republican ticket will be absent a Protestant as either the presidential or vice presidential candidate. Mitt Romney is Mormon and Paul Ryan is Catholic. Yet the Protestant, even evangelical heavy Iowa and Nebraska delegates who are filling the convention hall in downtown Tampa seemed unfazed […]

Getting down to work on a space elevator to the Moon

[CLICK ON IMAGE FOR FULL IMAGE] The idea of a giant tower that can carry us from Earth to outer space is legend, and it probably will be for a long time. But a company has successfully Kickstarted what they say is their first step to building one on the Moon. At $8,000, the project […]

Help wanted: Messiah at 1600 Pennsylvania Ave. to save the nation

BILL MAHER: Do you think that they have a messiah complex, because I always heard that Obama was “The One,” you know. REIHAN SALAM: He hasn’t pledged to lower the level of the seas yet. MAHER: Okay, but wait. This is what Ann Romney, I heard Ann Romney say this week. She was interviewed on […]

Pastor Rick Warren has canceled his highly anticipated “Saddleback Civil Forum” with presidential candidates Barack Obama and Mitt Romney, citing a lack of civil discourse between the two campaigns. Warren will hold a forum on religious liberty instead, which may bring attention to the Obama administration’s birth control mandate less than two months before the […] 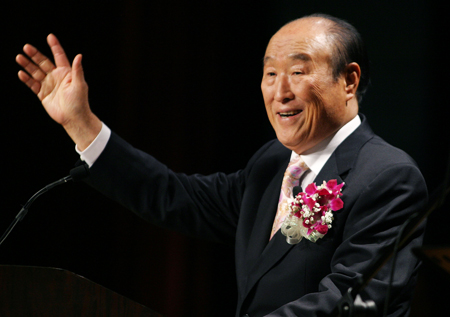 What if duplicate UFO sightings are quantum phenomena?

We’ve previously posed here the idea that UFOs may be macro-quantum artifacts …. And there is a way to test that hypothesis. If UFOs are macro-particles of quantum, they’d be subject to quantum entanglement; that is, a UFO seen in one place would mimic a UFO in another place, in the same time frame. The […]