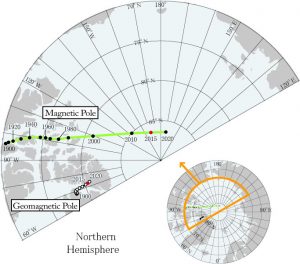 Scientists say the magnetic north pole is moving toward Russia and the fallout has reached — of all places — Tampa International Airport. The airport has closed its primary runway until Jan. 13 to repaint the numeric designators at each end and change taxiway signage to account for the shift in location of the Earth’s […]

Pole shifts have happened before and will happen again

To summarize everything, pole shift have happened before and will happen again. We just don’t know when the next one will occur. Like some say, we might be overdue because the last one was 780,000 years ago, but here’s the way I see it: They come at irregular intervals averaging about 300,000 years and it […]