New research is overturning longstanding assumptions about successful families, and doing so with a unexpected twist. Families who participate in church communities have on average both more children and more positive outcomes. 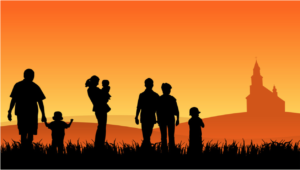 Social scientists have long treated family size as a zero sum game. The more children, the less resources per child and, presumably, the less long term success per child. This maxim, it turns out, is not only simple, but simplistic. It is true for some families, but not for others. The difference comes down to choices available to virtually all parents, everywhere. The key variable is involvement in church communities.

A study published by Great Britain’s longstanding scientific institution, the Royal Society, compares child development outcomes to family size among churchgoing and non-churchgoing families in the UK. Children in church going families had more siblings and scored higher on cognitive measures than their secular counterparts. Success correlated not merely to church attendance, but to active participation in a church community.

Researchers identified “alloparenting” that occurs among women in church communities as the determining factor. Whether themselves mothers or not, women in church communities had higher rates of voluntarily caring for other’s children outside of church. The authors believe that the parenting resources of participating mothers were thereby supplemented, enabling both larger family size and greater success per child.

There was also good news for one-child families in church communities. Cognitive benefits accrued regardless of the number of siblings. Just as families in church communities offset reductions in parental resources through alloparenting, so too it may be that they also offset disadvantages of an absence of siblings, by providing pseudo-sibling relationships during alloparenting.

The study did not examine what aspects or activities of alloparenting might have correlated to heightened performance. For example, did church mothers engage children in homeschool, creative activities, or moral instruction more often than secular counterparts? Was interaction with children of more diverse ages and greater alloparental supervision and interaction per child than occurs in daycare a factor? Did church communities provide parents with larger trusted networks of families with whom children engaged? Was greater consistency and predictability of shared values and beliefs important? One suspects all of these and perhaps others contributed beyond the simple enhancement of a mother’s time and energy resources.

Other measures than cognition also are important to children’s success and happiness in adulthood. The importance of an individual’s character, for example, outweighs the value of material or professional success in historic Christianity, as in all of the world’s major religions.

Other studies demonstrate the value of siblings. A childhood shared with one or more siblings may provide a greater impetus and richer variety of opportunity for character development. These opportunities might be multiplied further in religious communities, where more of the children interacting during alloparenting also have more siblings of their own.

Outcomes from China’s One Child Policy lend confirmation. Working from zero-sum game assumptions about family size and economics, from 1979 to 2016 the Chinese government limited family reproduction in most locales to a single child.

The 2019 documentary, One Child Nation, available on Netflix, reports the law was enforced by means that include forced abortion, sterilization, and razing to the ground the homes of violators. To conform and out of the desire of raising a future male breadwinner, many parents abandoned undesired infants, almost always girls, beside roads or markets. Most often, these perished by exposure and starvation.

In 2013, a study published in Scientific American found that China’s policy resulted in children who were “more pessimistic, neurotic and selfish than their peers who have siblings.”

Resulting attitudes among this younger generation also have proven problematic to longstanding Chinese cultural values of filial duty and the traditional family economy. For generations in China, adult children have given back to parents with a portion of their earnings and supported parents and grandparents in their old age.

The one-child policy, created a reordering of family relationships to the harm of both the children and these longstanding values. Within a generation China became a world largely without siblings. For those born in the second generation before 2016 it was a world also without aunts, uncles, or cousins. Two parents and two sets of grandparents now focused their resources and attention on a single child, the future contributor in their old age.

The result is said not to have produced a generation highly committed to traditional Chinese values of filial reciprocation and duty, but rather one that views such obligations as an imposition.

Taken together, multiple lines of research are showing benefits of siblings and religious communities to cognitive and character development, as well as emotional well being. Greater family size and child success are yet two more examples in a growing list of unexpected and promising discoveries of human flourishing in church communities.

Science increasingly provides independent confirmation of the longheld Christian belief that God’s command to multiply and fill the Earth was intended best to occur through communities focused on God himself, where his other mandates like meeting together and sharing one another’s burdens are lived out.

R. Clinton Ohlers, PhD is a historian of science and religion and a contributing editor for the FreePressMediaGroup. Previously, he held the position of Research Assistant Professor in the Humanities at the University of Hong Kong. His book, The Birth of the Conflict Between Science and Religion, is scheduled to appear in 2022. He received his PhD in history from the University of Pennsylvania.

Church is good news for families and child success, CosmicTribune.com

Church is good news for families and child success added by rcohlers on March 15, 2021
View all posts by rcohlers →