The luxury fashion house Balenciaga has issued an apology for its advertising campaign for its new products which featured young children holding teddy bears dressed in bondage gear. 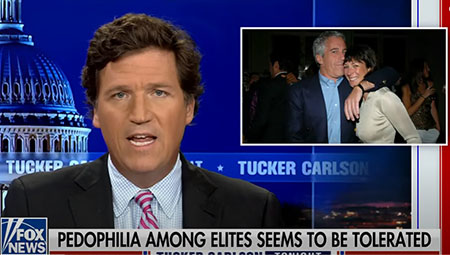 “We sincerely apologize for any offense our holiday campaign may have caused,” the brand said on Instagram. “Our plush bear bags should not have been featured with children,” the brand said, adding it will be “taking legal action against the parties responsible for creating the set and including unapproved items.”

Some media treated the controversy as some kind of joke.

An NBC News headline blared that Balenciaga had apologized for the “kinky ad.”

But Fox News host Tucker Carlson went there, calling out Balenciaga and all who are pushing what long had been “out of bounds,” the sexualization of children:

It is a staple of so-called conspiracy theories that at the highest levels of politics and finance, there is a shadowy cabal of pedophiles who use their power to hide the crimes they commit against children. People think that. Sounds pretty far out to us. Too dark and strange to be true and of course we are not, obviously, endorsing that idea. On the other hand, you can kind of see why people might believe it.

Jeffrey Epstein, for example, Epstein continued to dine with business moguls and heads of state long after he was arrested for having sex with minors. How did he do that? Why didn’t nobody say anything? Why did people keep eating with him? Well, at the very least, we can conclude, based on the evidence that there is a tolerance for pedophilia among some, among the most powerful in our society, a tolerance that you would not find in, say, your average middle class American family. Some of the rich really are different that way. That’s clearly true and in case you need more evidence of that, consider Balenciaga. Balenciaga is what they call a luxury brand.

“There’s never been a time in American history where pedophilia was considered anything other than the worst thing, the most horrifying crime imaginable,” Carlson said on his Tuesday program.

“There was not a single story about it in the New York Times this morning, or Jeff Bezos’ Washington Post or on CNN or NBC. There was no talk of an investigation or a boycott. The usual outraged merchants stayed completely silent because they weren’t outraged. Balenciaga ultimately issued a statement saying it was going to punish the photographer who did the shoot like it was the photographer’s fault and they didn’t know about it and after that, the story effectively died and that means that the CEO of Balenciaga, a man called Cédric Charbit, it will not become a social pariah for what his company has just done. He will continue, just as Jeffrey Epstein continued, to enjoy his busy social life, totally penalized with his many fabulous celebrity friends.”

Carlson added: “It is a dangerous cult that is causing irreparable harm to children — not just few, but a lot. Now, at some point when the spell breaks, our entire society will recognize this because it’s obvious and we will all recoil in shame that we ever tolerated it for a second, but we’re not there yet.”

‘Dangerous cult’: Are pedophilia and child sacrifice indeed favored by ruling elite? added by Cosmic1 on November 25, 2022
View all posts by Cosmic1 →