‘And the Lord commanded the fish, and it vomited Jonah onto dry land.’ — Jonah 2:10

Was Jonah literally swallowed by a whale when fleeing God’s command that he warn the city of Ninevah of its impending doom? Or was it a metaphor or narrative? The question has been debated in several religious traditions for thousands of years.

Friday, a lobster diver was swallowed into the mouth of a whale in an encounter off of Cape Cod. Michael Packard was 45 feet down when he says he “felt this huge bump and everything went dark.  I could sense that I was moving.” 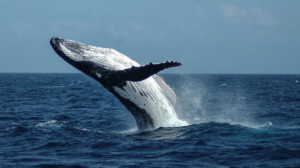 His first thoughts were that he had been swallowed by a Great White shark.

Packard, who has dived commercially for lobsters out of Provincetown for 40 years thought, “This is it, I’m gonna die.”

“I was completely inside [the whale]; it was completely black,” Packard told the Cape Cod Times. “I thought to myself, ‘there’s no way I’m getting out of here. I’m done, I’m dead. All I could think of was my boys, they’re 12 and 15 years old.”

“I could feel the whale squeezing with the muscles in his mouth,” Packard said. He began to struggle and the whale appeared to shake its head in discomfort.

“Then all of a sudden [the whale] went up to the surface and just erupted and started shaking his head. I just got thrown in the air and landed in the water,” Packard recalled. “I was free and I just floated there. I couldn’t believe. . . I’m here to tell it.”

Asked about his thoughts at the time in an interview with WBZ-TV in Boston, Packard responded, “It was happening so fast, my thought was to get out of the mouth. And I realized there was no overcoming a beast of that size. He was going to do with me what he wanted to do and either he spit me out or he swallowed me.”

“I was actually in his mouth about 30 seconds,” he added. “I had my regulator and I was breathing, and one of things that went through my mind was, ‘Oh my God, what if he does swallow me and here I am and I’m breathing air, am I going to breathe in this whale’s mouth until my air runs out?’ Crazy stuff.”

The event, which happened at about 8 a.m. also had another witness. Captain Joe Francis was heading a fishing charter nearby.

One expert suspects the whale was a juvenile, given the error, as Humpbacks eat only small fish, and that it didn’t see Packard.

“Based on what was described this would have to be a mistake and an accident on the part of the humpback,” said Jooke Robbins, director of Humpback Whale Studies at the Center for Coastal Studies in Provincetown.

Peter Corkeron, a senior scientist at the New England Aquarium, said that when humpback whales feed, “they do what we call gulp feeding, and they can open their mouths up incredibly widely.”

“It’s a very unusual accident. . . this is a one in a — goodness knows what — trillion chance,” he said. “He was just unlucky enough to be in the wrong place at the wrong time.”

Not only did Packard live to tell a whale of a story, after being released from the hospital he limped away with only bruises.

Was there a moral to this story or a warning from on high? We report, you decide.

Diver swallowed by whale lived to tell an incredible tale added by rcohlers on June 12, 2021
View all posts by rcohlers →