Dr. Paul Gosselin, who runs Patriots Health in Maine, was suspended from practice in November 2021 by the state’s Board of Osteopathic Licensure after complaints — not from patients but from other health professionals — that he was engaged in spreading “misinformation” about Covid-19.

Gosselin had written vaccine exemption letters, supported front-line workers being exempted from the Covid vaccination mandate, and his website posted treatment options for Covid that included hydroxychloroquine and ivermectin. 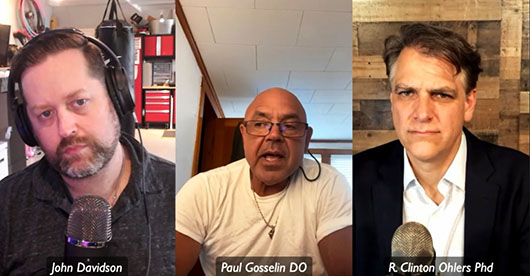 Opposing universal vax mandates and any mention of the effectiveness of hydroxychloroquine and ivermectin go against the narrative pushed by health overlords and their allies in the legacy media.

Gosselin found that out first-hand, but he is fighting back.

In a a riveting interview with the Broken Truth podcast, Gosselin, who is believed to be one of the first physicians to lose their license over Covid, said he is taking his case to the Maine medical licensing board and, reportedly, the Federation of State Medical Boards.

Gosselin said he had patients from other states driving three or four hundred miles “just to see me for Covid.”

On June 9, the third hearing regarding Gosselin’s Maine license to practice medicine was held. (Livestream coverage of the meeting can be seen here.)

Gosselin said the governor’s office informed Maine General hospital about the exemption letters he was writing in an effort to “take me down. And that’s what happened, they called the Board of Medicine, canceled my license and left my patients stranded.”

Gosselin added: “I found out how they control doctors. It’s the Federation of State Medical Boards. There’s an office in, I think, Texas and Washington, and they dictate disciplinary action for physicians” nationwide. “There are like 71 boards—Osteopathic boards, MD boards, and combinations-so it ends up being 71. They don’t all fall for it. Like Oklahoma doesn’t follow them, a couple of states don’t follow their dictates, but they’re paid by Big Pharma.”

“Seven years ago I reported a physician in Maine who was drugging and raping his young male patients. He’s still practicing. They took my license away for five and half years.”

Maine Journal News has detailed Gosselin’s ordeal and the dishonest reporting by the Portland Press Herald in Gosselin’s case.

In a March 10 article, Maine Journal News noted: “There are two medical licensing boards in Maine. One is for those with an MD degree and the other board oversees those with a DO degree (Doctor of Osteopathic Medicine). Both boards in Maine are targeting doctors in Maine who successfully treated Covid patients with early treatment protocols and who wrote medical exemptions for the Covid vaccine for healthcare employees.”

CosmicTribune.com, Doctor describes how his efforts to offer Covid treatments got his license suspended

Doctor describes how his efforts to offer Covid treatments got his license suspended added by Cosmic1 on June 10, 2022
View all posts by Cosmic1 →