Last week, on the MSNBC TV show “Morning Joe,” MSNBC contributor Donny Deutsch said that every American who votes for President Donald Trump is a Nazi.

His exact words: “If you vote for Trump, then you, the voter — you, not Donald Trump — are standing at the border like Nazis going, ‘You here. You here.'”

Now, as virtually every Jew of Deutsch’s generation knows, a Nazi saying, “You here. You here,” refers to guards at Nazi extermination camps sending Jews to gas chambers or to work the barracks. 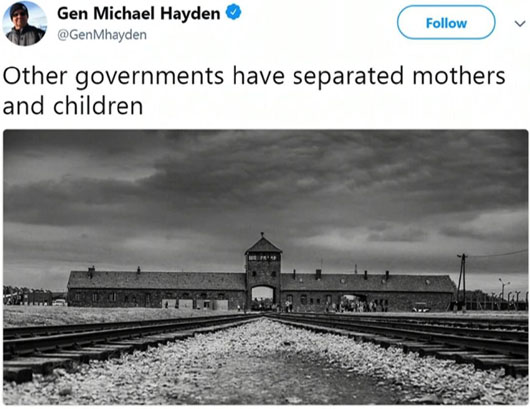 Also last week, Gen. Michael Hayden, a former director of the CIA (a fact that, among other things, gives credence to the increasingly widespread realization that our intelligence elites have been morally and intellectually compromised) tweeted a photo of the tracks leading into Auschwitz-Birkenau, the most infamous Nazi extermination and concentration camps, with the caption “Other governments have separated mothers and children.”

Deutsch, Hayden and the myriad other fools who compare Trump to Hitler and the Nazis have utterly trivialized the Holocaust.

As everyone who isn’t on the Left knows, there is nothing morally analogous between the way the last three presidential administrations dealt with some children of immigrants who are in the country illegally and what the Nazis did to Jewish children.

American children are routinely separated from their parent when that parent is arrested, and if the arrestee is a single parent, the child is taken into government custody until other arrangements can be made. With regard to immigrants who are in the country illegally, the only way to avoid separation is to place the children in detention along with their arrested parent(s). But this was expressly forbidden by the most left-wing court in America — the 9th Circuit Court of Appeals — if detention lasts longer than 20 days, as it nearly always does when either a not-guilty plea or an asylum claim is made.

Moreover, as awful as separation from a parent is, these children were not treated like animals in cages but transferred to the care of relatives or foster homes, or housed with other detained children where they were provided with room, board, education, sports facilities, etc.

By contrast, Jewish children separated from their parents by Nazi guards were sent to gas chambers to die a gruesome, painful death by their lungs being filled with poisonous gas. And their parents almost always eventually suffered the same fate unless they were worked, starved or tortured to death.

Comparing the two is not only a trivialization of the Holocaust; it is actually a form of Holocaust denial.

If Jewish children were treated by the Nazis the same way Central American children have been by America, then everything we know about the Holocaust is false. Jewish children weren’t subjected to torturous medical experimentation, and they weren’t gassed and cremated. They were simply separated from their Jewish parents for a finite period of time, sent to stay with Jewish relatives or provided for by foster families while their parents were detained pending due-process legal proceedings.

According to Donny Deutsch, Michael Hayden and all the leftists comparing America and Trump to the Nazis, Jewish children weren’t gassed; they played soccer while waiting to be reunited with their parents.

What is even more depressing than Deutsch and Hayden is the reaction — or silence — of most American Jewish organizations.

The Anti-Defamation League, which once defended Jewish interests, is becoming just another leftist interest group. I looked for some condemnation of Deutsch or Hayden and found none. Instead, in the words of the Israeli (left-wing) newspaper Haaretz, the ADL “made a direct comparison to the Holocaust.” It tweeted: “Children separated from their parents during the Holocaust speak out about the trauma it has caused. How can anyone defend such inhumane policies?”

The only criticism the ADL could muster was this: “People need to be extremely careful in drawing comparisons to the Holocaust and the Nazi regime in whatever context it is used.” But it offered no condemnation of those who actually made this odious comparison.

Leftism has poisoned much of American Jewish life. That is the primary reason, as reported in the just-released American Jewish Committee poll, American and Israeli Jews are so divided on so many issues.

There were rabbis who announced they fasted when Trump was elected. Non-Orthodox synagogues around America sat shiva (the religious mourning period for a deceased immediate family member) when Trump won. And the Hebrew Union College, the Reform Jewish movement’s rabbinical seminary, had an Israel-hating writer as this year’s graduation speaker.

If you support Trump or Israeli Prime Minister Benjamin Netanyahu, or hold almost any traditional Jewish worldview — like God creating the human being as male and female — you must either hide your opinion or risk being ostracized at almost any non-Orthodox synagogue.

To their credit, the Simon Wiesenthal Center, the Zionist Organization of America and a few other organizations did condemn those who equate America under Trump with Nazi Germany. But most Jewish organizations kept quiet, offered tepid caution or actually echoed the sentiment.

In other words, at this time many American Jewish organizations are bad for the Jews, bad for Judaism and trivialize the Holocaust in order to score political points.

If it’s any comfort (and it isn’t), things are no better in mainstream Protestantism or at the Vatican.

But here is real comfort: If the Left keeps on smearing nearly half its fellow Americans as Nazis, it will assure more Republican victories this coming November.