America’s colleges for some time have been “breeding very excellent sheep” who know how to follow in lockstep with the Woke herd, but don’t know how to be independent adults, a former Yale professor wrote.

William Deresiewicz, who taught English at Yale University for ten years, separated himself from the herd when he wrote the book “Excellent Sheep: The Miseducation of the American Elite and the Way to a Meaningful Life”.

The following are excerpts of an essay written by Deresiewicz which was posted on May 24 to Bari Weiss’s Common Sense on substack.com: 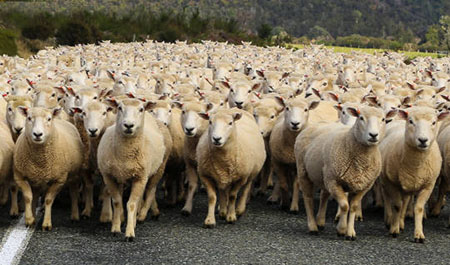 I had some vivid, idiosyncratic students — people who went on to write novels, devote themselves to their church, or just wander the world for a few years. But mostly I taught what one of them herself called “excellent sheep.”

These students were excellent, technically speaking. They were smart, focused, and ferociously hard-working.

But they were also sheep: stunted in their sense of purpose, waiting meekly for direction, frequently anxious and lost.

I was so struck by this — that our “best and brightest” students are so often as helpless as children — that I wrote a book about it. It came out in 2014, not long before my former colleague Nicholas Christakis was surrounded and browbeaten by a crowd of undergraduates for failing to make them feel coddled and safe — an early indication of the rise of what we now call wokeness.

Excellent sheephood, like wokeness, is a species of conformity. As a friend who works at an elite private university recently remarked, if the kids who get into such schools are experts at anything, it is, as he put it, “hacking the meritocracy.” The process is imitative: You do what you see the adults you aspire to be like doing. If that means making woke-talk (on your college application; in class, so professors will like you), then that is what you do.

But wokeness also serves a deeper psychic purpose. Excellent sheephood is inherently competitive. Its purpose is to vault you into the ranks of society’s winners, to make sure that you end up with more stuff—more wealth, status, power, access, comfort, freedom — than most other people. This is not a pretty project, when you look it in the face. Wokeness functions as an alibi, a moral fig leaf. If you can tell yourself that you are really doing it to “make the world a better place” (the ubiquitous campus cliché), then the whole thing goes down a lot easier.

All this helps explain the conspicuous absence of protest against what seem like obviously outrageous facts of life on campus these days: the continuing increases to already stratospheric tuition, the insulting wages paid to adjunct professors, universities’ investment in China (possibly the most problematic country on earth), the draconian restrictions implemented during the pandemic.

Yes, there have been plenty of protests, under the aegis of wokeness, in recent years: against statues, speakers, emails about Halloween costumes, dining hall banh mi. But those, of course, have been anything but countercultural. Students have merely been expressing more extreme versions of the views their elders share. In fact, of the views that their elders have taught them: in the private and upscale public high schools that have long been dominated by the new religion, in courses in gender studies, African-American studies, sociology, English lit.

In that sense, the protesters have only been demonstrating what apt pupils they are. Which is why their institutions have responded, by and large, with pats on the head. After the Christakis incident, two of the students who had most flagrantly attacked the professor went on to be given awards (for “provid[ing] exemplary leadership in enhancing race and/or ethnic relations at Yale College”) when they graduated two years later.

College is now regarded as the last stage of childhood, not the first of adulthood. But one of the pitfalls of regarding college as the last stage of childhood is that if you do so then it very well might not be. The nature of woke protests, the absence of Covid and other protests, the whole phenomenon of excellent sheephood: all of them speak to the central dilemma of contemporary youth, which is that society has not given them any way to grow up—not financially, not psychologically, not morally.

Children can’t be children if adults are not adults, but children also can’t become adults. They need something solid: to lean on when they’re young, to define themselves against as they grow older. Children become adults — autonomous individuals — by separating from their parents: by rebelling, by rejecting, by, at the very least, asserting. But how do you rebel against parents who regard themselves as rebels? How do you reject them when they accept your rejection, understand it, sympathize with it, join it?

So here is my commencement message to the class of 2022. Beware of prepackaged rebellions; that protest march that you’re about to join may be a herd. Your parents aren’t your friends; be skeptical of any authority that claims to have your interests at heart. Your friends may turn out to be your enemies; as one of mine once said, the worst thing you can do to friends is not be the person they want you to be. Self-authoring is hard. If it isn’t uncomfortable, it isn’t independence. Childhood is over. Dare to grow up.

Deresiewicz’s new book, “The End of Solitude: Selected Essays on Culture and Society”, will be out this August.

Former Yale professor: Colleges turning out ‘excellent sheep’, that are ‘anxious and lost’ added by Cosmic1 on May 31, 2022
View all posts by Cosmic1 →