Pope Francis made comments last week that reveal the most important single thing you need to know about the modern world: The most dynamic religion of the last hundred years has been Leftism. Not Christianity, and not Islam, but Leftism. 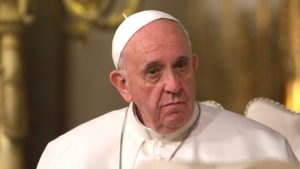 On July 26, two Muslims slit the throat of a French Roman Catholic priest, the Rev. Jacques Hamel, 85, while he was saying Mass in his church.

Five days later, during his flight returning to Rome from World Youth Day in Krakow, Poland, Pope Francis gave a press conference. He was asked about the French priest and Islam by Antoine-Marie Izoard, a journalist with I.Media, a French Catholic news agency. Izoard said:

“Catholics are in a state of shock — and not only in France — following the barbaric assassination of Father Jacques Hamel in his church while he was celebrating Holy Mass. Four days ago … you told us once again that all religions want peace. But this holy priest, eighty-six years old, was clearly killed in the name of Islam. So I have two brief questions, Holy Father. When you speak of these violent acts, why do you always speak of terrorists but not of Islam? … And then, … what concrete initiative can you launch or perhaps suggest in order to combat Islamic violence?”

“I don’t like to speak of Islamic violence because every day when I open the newspapers I see acts of violence, here in Italy: someone kills his girlfriend, someone else his mother-in-law…and these violent people are baptized Catholics! They are violent Catholics…If I spoke about Islamic violence, I would also have to speak about Catholic violence.”

The pope of the Roman Catholic Church, when asked about Islamic terror and the slitting of the throat of a Roman Catholic priest by Islamic terrorists, responds that there is also Catholic terror — that a man who was baptized Catholic who “kills his girlfriend” is the moral and religious equivalent of Muslims who engage in mass murder in the name of Islam.

How can anyone compare:

— A person who happens to have been baptized Catholic as a child — and may have no Catholic identity as an adult — with an adult who affirms a religious identity?

— The murder of a girlfriend (most likely a crime of passion) with the ritual murder of a Catholic priest because he was a priest?

— Individual murders that have nothing to do with any ideology with mass murders committed in the name of an ideology?

“Terrorism is everywhere! … Terrorism … increases whenever there is no other option, when the global economy is centred on the god of money and not the human person, men and women. This is already a first form of terrorism.

You’ve driven out the marvel of creation, man and woman, and put money in their place. This is a basic act of terrorism against all humanity. We should think about it.”

Terrorism grows “when there is no other option”?

The implication that Islamic terrorism is a desperate act arising from poverty is widely held on the Left. But it is false.

Most Islamic terrorists come from the middle class or above. In the recent case of the Bangladeshi terrorists, for example, nearly every one of them came from some of the wealthiest families in Bangladesh. And, as is well-known, most of the 9/11 hijackers came from middle- and upper middle-class families.

Islamic terrorism doesn’t come from economics; it comes from its theology.

Terrorism grows “when the global economy is centred on the god of money”?

The pursuit of money and terror have nothing to do with each other. Terrorism grows only when some ideology preaches it. All this statement does is provide an excuse for Islamist terror by blaming the “global economy” and the “god of money” instead of the terrorists and their god of death.

A “first form of terrorism” is when “the global economy is centred on the god of money”?

It is a bad thing when money becomes a god, but there is no comparison between the “god of money” and the horrors of Islamic terror. Yazidi women weren’t gang raped and burned alive because of the “global economy” and its “god of money.”

The only explanation for these statements is that Pope Francis has inherited his theology from Catholicism, but unlike his immediate predecessor, Pope Benedict XVI, he has inherited much of his moral outlook from Leftism.

The Western combination of Judeo-Christian morality and political liberalism — with its doctrine of moral accountability, moral absolutes, confronting evil, and political and social freedom — has produced the most moral societies in world history.

The pope of the Roman Catholic Church should be its greatest advocate. But because of Leftism, he isn’t.