Daniel 7 1 In the first year of Belshazzar king of Babylon, Daniel had a dream, and visions passed through his mind as he was lying in bed. He wrote down the substance of his dream. 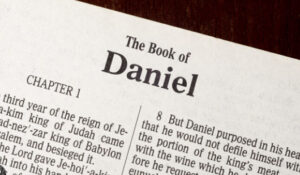 2 Daniel said: “In my vision at night I looked, and there before me were the four winds of heaven churning up the great sea.

3 Four great beasts, each different from the others, came up out of the sea.

4 “The first was like a lion, and it had the wings of an eagle. I watched until its wings were torn off and it was lifted from the ground so that it stood on two feet like a human being, and the mind of a human was given to it.

5 “And there before me was a second beast, which looked like a bear. It was raised up on one of its sides, and it had three ribs in its mouth between its teeth. It was told, ‘Get up and eat your fill of flesh!’

6 “After that, I looked, and there before me was another beast, one that looked like a leopard. And on its back it had four wings like those of a bird. This beast had four heads, and it was given authority to rule.

7 “After that, in my vision at night I looked, and there before me was a fourth beast — terrifying and frightening and very powerful. It had large iron teeth; it crushed and devoured its victims and trampled underfoot whatever was left. It was different from all the former beasts, and it had ten horns.

8 “While I was thinking about the horns, there before me was another horn, a little one, which came up among them; and three of the first horns were uprooted before it. This horn had eyes like the eyes of a human being and a mouth that spoke boastfully.

“thrones were set in place,
and the Ancient of Days took his seat.
His clothing was as white as snow;
the hair of his head was white like wool.
His throne was flaming with fire,
and its wheels were all ablaze.

11 “Then I continued to watch because of the boastful words the horn was speaking. I kept looking until the beast was slain and its body destroyed and thrown into the blazing fire.

12 (The other beasts had been stripped of their authority, but were allowed to live for a period of time.)

13 “In my vision at night I looked, and there before me was one like a son of man, coming with the clouds of heaven. He approached the Ancient of Days and was led into his presence.

14 He was given authority, glory and sovereign power; all nations and peoples of every language worshiped him. His dominion is an everlasting dominion that will not pass away, and his kingdom is one that will never be destroyed.

glory and sovereign power …. His kingdom will never be destroyed, He was given authority

He was given authority, glory and sovereign power …. His kingdom will never be destroyed added by Cosmic1 on January 9, 2023
View all posts by Cosmic1 →