“Don’t be evil” is Google’s corporate motto and ostensibly the driving ethos behind the company’s decisions since its inception in the early 2000s. However, Google has been quietly distancing itself from this promise as the reality of its power over the world becomes too alluring for the company to deny. 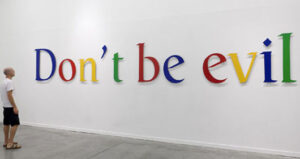 Indeed, Google is guilty of evil, whether it be censorship on behalf of Russia or China or injecting its own political biases to steer the course of U.S. elections.

Search engines work by traversing the web and indexing each webpage by relevant key terms or concepts. When a user performs a search, the algorithm retrieves the pages based on the query and ranks them based on relevance.

The core questions are then: “How to interpret a user search?” “What pages are relevant?” and “How to order them?” The subjective nature of these questions leave a lot open to interpretation and a way for human bias to creep in.

Since search engines nowadays act as the primary gateway to information for a majority of people, the impact of that bias has a huge, compounding effect on society.

Google’s meteoric rise to dominance is mostly attributed to its ability to monetize search. In the beginning, it offered paid positions at the top of search results, where advertisers had to fork over a few cents per click. As you may recall, these spots were once clearly labeled as paid sponsors on the right side of the page.

However in 2016, Google integrated these directly into the search result, over time making them indistinguishable from “organic” results. At the same time, Google kicked off a major initiative to track users’ digital activity (and later physical/social activity via Android) to deliver “personalized” advertising products to its advertisers. Ironically, this trend has made the quality of Google search results worse over time; search results end up being less relevant, since paid results are prioritized over relevant ones. Moreover, these enormous personal profiles that Google has built over time have enabled advertisers and the government to spy on American citizens.

In the 18 months following psychologist Robert Epstein’s bombshell claim that Google’s search engine has a “very substantial pro-liberal bias,” numerous studies have propped up indeed showing that search engine bias exists and harms. As the dominant leader in the space, Google’s biases have a tremendous impact on the way we consume information; de-listing something on Google is akin to erasing it from collective memory. [George Orwell’s ‘1984,’ anyone?]

The imprecise nature of searching makes it hard for competitors to disrupt the market; however, a few companies have explored alternative business models to combat Google. The most notable is DuckDuckGo [which however has recently begun filtering out “disinformation“]. The search engine company has firmly anchored itself as the antithesis of Google: it explicitly does not track users, does not build profiles and performs its due diligence to ensure the quality of search results remain neutral per person. What’s more is that the company has been active in exposing political biases at Google: in the 2012 U.S. election, it showed that Google’s results showed a preference for searches on Democrat Barack Obama over Republican Mitt Romney, which sparked a follow-up study by the Wall Street Journal.

Google’s wanton disregard for free speech and questionable business practices continues to metastasize the company in a race to the bottom, bringing down free society along with it.

Richard N. Madden is a researcher in the fields of Cryptography and digital hardware design. He holds a Master’s degree in Computer Engineering with particular interest in security, data privacy and digital rights.

How Google’s search engine indeed deceives and ‘harms’ added by Cosmic1 on April 29, 2022
View all posts by Cosmic1 →