It is time for our society to acknowledge a sad truth: America is currently fighting its second Civil War.

In fact, with the obvious and enormous exception of attitudes toward slavery, Americans are more divided morally, ideologically and politically today than they were during the Civil War.

For that reason, just as the Great War came to be known as World War I once there was World War II, the Civil War will become known as the First Civil War when more Americans come to regard the current battle as the Second Civil War. 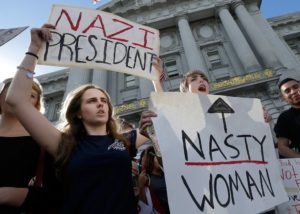 This Second Civil War, fortunately, differs in another critically important way: It has thus far been largely nonviolent. But given increasing left-wing violence, such as riots, the taking over of college presidents’ offices and the illegal occupation of state capitols, nonviolence is not guaranteed to be a permanent characteristic of the Second Civil War.

Liberalism — which was anti-left, pro-American and deeply committed to the Judeo-Christian foundations of America; and which regarded the melting pot as the American ideal, fought for free speech for its opponents, regarded Western civilization as the greatest moral and artistic human achievement and viewed the celebration of racial identity as racism — is now affirmed almost exclusively on the right and among a handful of people who don’t call themselves conservative.

The Left, however, is opposed to every one of those core principles of liberalism.

Like the Left in every other country, the Left in America essentially sees America as a racist, xenophobic, colonialist, imperialist, warmongering, money-worshipping, moronically religious nation.

Just as in Western Europe, the Left in America seeks to erase America’s Judeo-Christian foundations. The melting pot is regarded as nothing more than an anti-black, anti-Muslim, anti-Hispanic meme.

The Left suppresses free speech wherever possible for those who oppose it, labeling all non-left speech “hate speech.” To cite only one example, if you think Shakespeare is the greatest playwright or Bach is the greatest composer, you are a proponent of dead white European males and therefore racist.

Without any important value held in common, how can there be unity between left and non-left? Obviously, there cannot.

There will be unity only when the Left vanquishes the right or the right vanquishes the left. Using the First Civil War analogy, American unity was achieved only after the South was vanquished and slavery was abolished.

How are those of us who oppose left-wing nihilism — there is no other word for an ideology that holds Western civilization and America’s core values in contempt — supposed to unite with “educators” who instruct elementary school teachers to cease calling their students “boys” and “girls” because that implies gender identity? With English departments that don’t require reading Shakespeare in order to receive a degree in English?

With those who claim that the term “Islamic terrorist” is an expression of religious bigotry?

The third significant difference between the First and Second Civil Wars is that in the Second Civil war, one side has been doing nearly all the fighting. That is how it has been able to take over schools — from elementary schools, to high schools, to universities — and indoctrinate America’s young people; how it has taken over nearly all the news media; and how it has taken over entertainment media.

The conservative side has lost on every one of these fronts because it has rarely fought back with anything near the ferocity with which the Left fights.

Name a Republican politician who has run against the left as opposed to running solely against his or her Democratic opponent. And nearly all American conservatives, people who are proud of America and affirm its basic tenets, readily send their children to schools that indoctrinate their children against everything the parents hold precious. A mere handful protest when their child’s teacher ceases calling their son a boy or their daughter a girl, or makes “slave owner” the defining characteristic of the Founding Fathers.

But it will not happen until these groups understand that we are fighting for the survival of America no less than the Union troops were in the First Civil War.