As of tonight, we may know if Donald Trump will be the Republican presidential candidate. And, barring unforeseeable events, it is certain that Hillary Clinton will be the Democratic nominee.

Those are two reasons — of many, unfortunately — why, other than the first years of the Civil War, when the survival of the United States as one country was in jeopardy, there has never been a darker time in American history.

The various major wars — the Revolutionary War, the Civil War, World War I and II, and the Korean and Vietnam wars — were worse in terms of American lives lost. 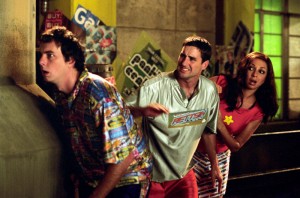 The co-writer of the film “Idiocracy” has said he never thought the comedy would become a documentary.

There were more riots during the Vietnam War era.

But at no other time has there been as much pessimism — valid pessimism, moreover — about America’s future as there is today.

Among the reasons are:

Every distinctive value on which America was founded is in jeopardy.

According to a Pew Research Center study, more and more young Americans do not believe in freedom of speech for what they deem hate speech. Forty percent of respondents ages 18 to 34 agreed that offensive statements should be outlawed.

According to a series of Harvard University polls, about 47 percent of Americans ages 18 to 29 believe that food, shelter and health care “are a right that government should provide to those unable to afford them.” That means that nearly half our young believe they have a legitimate claim on the labor and earnings of others for life’s basic necessities.

More than half of 18- to 29-year-old Americans do not support capitalism, the source of the prosperity they enjoy, and the only economic system that has ever lifted mass numbers of people out of poverty.

When young Americans see pictures of the Founding Fathers, they do not see the great men that most Americans have seen throughout American history; they see white males who were affluent (now derisively labeled “privileged”) and owned slaves.

The belief that certain fundamental rights are God-based — a view held by every American founder and nearly all Americans throughout its history — is reviled outside of conservative religious circles, and held by fewer and fewer Americans today.

The view that male and female are distinctive identities — one of the few unquestioned foundational views of every society in history — is being obliterated. Simply saying that one believes (all things being equal) a child does best starting out life with a married father and mother will ensure they’ll be considered a “hater.”

The ideas that America should be a melting pot, or that all Americans should identify as American, are now unutterable in educated company. In fact, many college campuses do not have an American flag on their campus because some students regard it as offensive and representational of imperialism and capitalism.

In addition, virtually every major institution is in decay or disarray.

Religious institutions, which, for most of American history, have been the most important institutions in everyday American life, are being rendered irrelevant. And a larger number of Americans, many more than ever before, do not identify with any religion.

The traditional family has become nothing more than one of many options open to Americans. For the first time in American history there are more unmarried women than married women. The number of adults age 34 and under who have never been married is nearing 50 percent. In recent years, data showed just 20 percent of Americans ages 18 to 29 are wedded, compared to nearly 60 percent in 1960. Additionally, more than 40 percent of American births are to unmarried women. Among Hispanic women the percent is over 53, and among black women the rate is over 71 percent.

Universities (outside the natural sciences and mathematics), are intellectual frauds. In terms of ability to think clearly, they actually make most students dumber than before they entered college. As Pulitzer Prize-winning Wall Street Journal columnist Bret Stephens wrote recently, “American academia is, by and large, idiotic.”

National, state and city governments have no doubt largely engaged in Ponzi-scheme-like practices, racking up levels of debt that will crush the economy of the country sooner or later.

The size of the federal government, and its far-reaching meddling in and control over Americans’ lives, is the very thing America was founded to avoid.

The arts are as fraudulent as academia. Artistic standards have been destroyed. In music, art and architecture, nonsense and ugliness have replaced the pursuit of meaning, edification and beauty. The scatological have replaced the noble.

And now there’s Clinton and Trump. Nothing more clearly exemplifies the dark time in which we are living than this political version of Sophie’s choice.

I will not end on a happy note because there isn’t one; but neither will I despair.

One doesn’t fight only when one is optimistic. One fights because it is the right thing to do, and because America remains, as Lincoln said, “the last best hope of earth.”