An upcoming book by the owner of the now-defunct Delaware computer repair shop where Hunter Biden abandoned his laptop in April 2019 details who the FBI agents were and what they said when they showed up with a subpoena and took possession of the “laptop from hell.”

John Paul Mac Isaac said he felt it was his patriotic duty to notify authorities about the laptop. 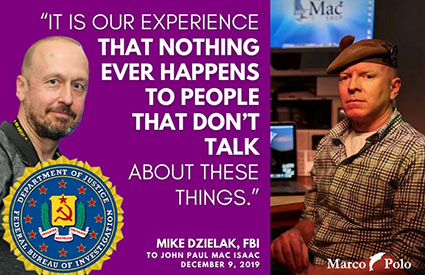 In “American Injustice: My Battle to Expose the Truth”, Mac Isaac writes that “at almost every step, I was met with skepticism, suspicion and even death threats. I feared for my life, not just in the face of angry strangers but in the face of a hostile FBI.”

On Dec. 9, 2019, FBI agents Mike Dzielak and Josh Wilson from the Wilmington Resident Agency of the bureau’s Baltimore Field Office delivered a grand jury subpoena to Mac Isaac at the computer repair shop in Wilmington and seized the laptop.

As the agents were leaving the shop, Mac Isaac said that Dzielak told him point blank: “It is our experience that nothing ever happens to people that don’t talk about these things.”

An hour later, Mac Isaac said Dzielak called him for technical help to access the drive.

Just before Christmas 2019, Dzielak phoned Mac Isaac again to ask if Hunter Biden had come in asking for the laptop. Mac Isaac told him no, noting that the agent “seemed genuinely surprised, and that worried me.”

Trump White House adviser Garrett Ziegler’s Marco Polo group noted that Wilson and Dzielak “have since attempted to scrub their online footprint, but Wilson is still featured in several articles. Locating a picture of Dzielak, however, proved somewhat difficult — and now we know why.”

In May 2020, convinced the FBI had buried the laptop, Mac Isaac and his father tried to contact Republican members of Congress, to no avail.

“For almost a year I have been trying to get the contents of Hunter Biden’s laptop to the proper authorities. I first reached out to the FBI and they came and collected it, but I have reason to believe they have destroyed it or buried it in a filing cabinet. After months of waiting for something to come of this, I can only assume that members of the FBI, who are against the President [Trump], have it and it will never be seen again. Luckily, for my protection, I made several copies and I have been trying quietly to bring it to people’s attention.”

Miranda Devine, who broke the Hunter Biden laptop story for the New York Post, noted: “If it weren’t for Mac Isaac’s persistence and savvy, Hunter Biden’s laptop never would have seen the light of day, and America would be none the wiser about the FBI’s nefarious role in covering it up.”

Tale of two men: Secrecy, patriotism and the Hunter Biden laptop added by Cosmic1 on November 11, 2022
View all posts by Cosmic1 →