Now that Trump is on the rally trail again, it’s time to consider the case a free press would have made, but didn’t because the mainstream media is no longer constrained by truth but rather the interests of a select few. 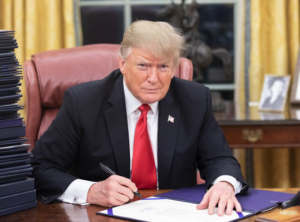 It’s no surprise to anyone that Trump’s largest block of support came from evangelicals and old conservatives. And, despite what a minority of evangelicals might have said about one-issue voting (see: https://www.prolifeevangelicalsforbiden.com), the case for Trump is not one-issue.[1] Instead, older truer conservatives have numerous reasons to favor his platforms.

What was the case for Trump? Here’s 10 reasons (or issues) why his Presidency sustained Western Civilization, which older truer conservatives were committed. With Trump out, we are seeing decay at a rapid rate. One could sum up the value that is central to all these issues as heritage (i.e., that which is good, true, and beautiful).

The first and most apparent reason that favored Trump’s presidency was his consistent pro-life stance during his time as GOP candidacy leading up to 2016 and his unwavering support for life during his time in office. Let’s look at his record.

Fourth, he has defunded the Pro-Abortion UNFPA.

Fifth, he required health insurance companies to disclose if their plans fund abortions.

Sixth, he appointed strong pro-life advocates to important positions in his administration.

Seventh, he permitted states to defund Planned Parenthood of Medicaid funds, and he has cut $60 million of tax funds to Planned Parenthood. Eighth, he canceled taxpayer funds for experimentation on aborted babies.

Ninth, the HHS announced that it would act against California for violating the Weldon Amendment, which protects organizations from discrimination for not including abortions in their plans.

Tenth, Trump’s administration clarified that abortions are not healthcare rights.

Eleventh, Trump was, and still is, the first President to speak at the March for Life. Twelve, Trump signed an executive order protecting infants that are born alive.

Am I missing anything? The wins under Trump’s administration were exceptional, and they disclosed a heart for both life and family. And, for those who preach an ethic of life consonant with the reality that Christ brings life through redemption of all (including embryonic life), then Trump’s efforts had a galvanizing affect to traditional, conservative, Christians who put a priority on the life of embryos.

While there is no attempt to undermine important discussions about whole life considerations, whole life positions are predicated and dependent on the right to life. One is foundational upon which the other stands. But, again, this was the most obvious reason to favor Trump’s presidency.

And, if you listened carefully to the discussions over the past years of his presidency, then you might think this was really the only reason. Well, think again.

Did I mention that Trump appointed three originalist Supreme Court Justices? And, they were confirmed! These were not only wins for the pro-life movement, but they were stabilizing wins that keep us close to the constitution—the fundamental law of the land. With that said, the Justices have been disappointing in some respects, which, once again, may point to the fear controlling Washington. Who would’ve thought these three judges would have supported the Affordable Care Act? Or, that they would reject numerous lawsuits concerning the 2020 election. With these and other concerns, their performance has been less than stellar.

As if the wins for the pro-life position were not enough to convince one that religious liberty was protected under Donald Trump, there were additional victories worth noting. You may be familiar with the win for the Little Sisters of the Poor. As the Washington Examiner rightly puts it: “Last week’s Supreme Court decision in Little Sisters of the Poor v. Pennsylvania was a major victory for freedom of religion and conscience in the United States. It affirms that the Trump administration properly crafted an exemption that allows the Little Sisters, an order of nuns, to carry out its work caring for the elderly poor without being forced to violate the nuns’ consciences.”

No matter where you stand on vaccines, Trump’s administration navigated these waters well, and given all that is taking place now with the barrage of pressure to take of recently developed Covid-19 vaccines, Trump’s administration was both reasonable and appreciated. Maybe you are pro the vaccine schedule given to us by the CDC. Or, alternatively, maybe you are an anti-vaxxer. Or, possibly, you are somewhere in the middle (i.e., as a hesitator, a non-vaxxer, or a scaled down vaxxer). Trump’s stance on vaccines may have been ambiguous on some of the particulars, but what is clear is that Trump did not push vaccines on the American people.

For those who hold moderate to anti-vaxxer positions, this is good. But, I am sure that even that those who affirm the CDC schedule without reservation can appreciate the fact that freedom is at stake with administrations that might mandate vaccines in the future—and we are already seeing increasing pressure to that end.

Trump consistently took a very reasonable stance, especially as it concerns the forthcoming COVID-19 vaccine. Instead of pushing the vaccine, he has made it available along with other treatments (i.e., therapeutics) that were available, but increasingly suppressed or mocked by the mainstream media or the elites. This was left up to the conscience of individuals to make a rational determination about the best way forward for their families. He has promoted both as options. This was not only very sane, but it was a relief to those who were and are weary of government control on healthcare.

While debates will continue about his success concerning the economy, many have and continue to claim the following successes: record labor market since 1969, consistently high GDP, soaring stock market, ethnic employment rates increased compared to previous administrations, he made numerous cuts to taxes (corporate tax was cut 35%), he made tarriffs and trading with other countries more equitable. To be fair, he spent more than many previous presidents, which isn’t exactly consistent with his other conservative platforms—he’s not much of a fiscal conservative.

Did anyone noticed that we heard very little about the Middle East during 2020? Maybe that was actually a good thing. While we were consumed with the pandemic and the rioters prompted primarily by Antifa and the Black Lives Matters organizations, little was being discussed about the Middle East. This is, arguably, another success under Trump’s administration. Unlike previous democratic and republican Presidents who have taken hawkish policing stances, President Trump (albeit inconsistently) has assumed an isolationist foreign policy.[2] Consider that Trump brokered a peace dealbetween Bahrain and Israel, which set a precedent for Arab state peace deals. Further, Trump acknowledged Jerusalem as Israel’s capital. These were significant wins for his administration.

Remember when Trump said to Governor Bush: “Your brother ruined Iraq.” Trump then showed his worth by calling out elite Republicans who were stuck in the same issue for over 50 years. He took on the ‘establishment’ of both Republicans and Democrats by challenging what appeared to be a gridlock. His policies, arguably led to successfully cutting the gordian knot on the Palestinian issue and overthrowing ISIS as a major force in the Middle East. Oh, and lets not forget the withdrawal from a 20 year war with Afghanistan. He walked away from the Iran deal, which weakened Iran’s imperial power.

Again, by not returning to the old entrenched ideas that Israel could not be integrated into the Middle East, Trump’s tenacity and authority persisted to replace old precedents with a new one that could ensure ongoing peace in the Middle East.

But, it is also worth pointing out Trump’s isolationist stance on foreign policy, which has been met with both praise and criticism. Albeit inconsistent, his commitment to withdrawing from Syria represents a significant departure from previously entrenched neo-conservative hawkish policies that have been praised by those occupying the political spectrum.

Related to both his foreign policy and immigration, Trump’s successes on closing the Borders, especially from Mexico, are significant. It was no wonder that nearly, if not actually, 100% of the Border Patrol Agents support Donald Trump. And, part of this had to do with his building a wall that is stable, thicker, and taller. Whatever the media was, and still is, telling the American people about the Mexican border, it was clear from those on the front lines that Trump has done more for border control than previous Presidents.

For those who care about lowering drug activity across the border, controlling sex trafficking, President Trump’s actions (while not enough) have affected border security more than previous Presidents. During my time of living near the border of Mexico, the message was consistently confirmed by border patrol agents and the message remains now that Biden is in office: “Trump has been the best on the Mexican border.”

While there was more to do, it was moving in the right direction. In fact, with Biden overturning nearly all of Trump’s successes at the Border we are experiencing a crisis, which has increased crime (e.g., drugs, violence, trafficking).

By establishing law and order at our borders (in Mexico and elsewhere) and bolstering his belief in a merit-based entry system, Trump demonstrated a commitment to American interests rather than foreign interests or the interests of global elites.

If the above weren’t sufficient for crystalizing Trump’s priority to the American people, then it bears repeating that he explicitly repudiated globalist ideology on numerous fronts (e.g., healthcare, economy, trade, tariffs etc) and he repeatedly committed to America first values.

Trump’s persistence on these matters was credit worthy precisely because of the progress he makes on these rather ‘unpopular’ fronts. In light of barriers placed by the opposition, Trump persisted in his commitment to his fundamental value of ‘Making American Great Again.’

As Heather MacDonald has put it, he reflects a kind of ‘positive masculinity’, that is ‘rational and unbowed’. Heather was of course discussing Trump’s response to the COVID-19 pandemic hysteria upon leaving the hospital after treatment received. Her point reflected a larger trend in Trump’s presidency, however. He championed level-headed policies that serve the American people. And, Trump demonstrates a masculinity that is committed to America’s good, despite the outstanding resistance.

Rather than bow to the global elites, the technocrats and the demagoguery of the Democratic party, Trump stands firmly committed to what good ole’ Conservatives once believed, but no longer have the stamina to uphold. The masculine response is not to accede, but to stand against the mounting pressure to capitulate.

This is why Donald Trump reflects positive masculinity, and a number of reasons favor his policies and platforms, but you wouldn’t know that by watching the mainstream media.

[1] I am certainly not suggesting that one-issue voting is objectionable. All the issues are not on equal footing and the pro-life position (as it presumes a traditional sexual ethic) is very likely the most important issue in our time.

[2] For a non-conservative take, see the following: https://foreignpolicy.com/2020/10/14/trump-foreign-policy-wins-losses-over-four-years-china-middle-east-coronavirus-pandemic/  Do not forget that NAFTA underwent a renegotiation. Trump also placed tariffs on China.

Trump and the case for a free press added by rcohlers on July 9, 2021
View all posts by rcohlers →